From the Desk of Mr. James Byrd: Fall Brings Thoughts About Apples 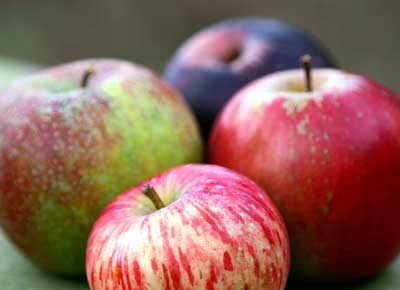 Apples date back to ancient times as a valued source of food.  When settlers came to America from Europe, they brought seedling apple trees and seeds.  They were wise in doing that, because the land had only crabapple trees.  Widespread planting of trees and seeds helped keep people from starving.

When our ancestors settled in the mountains, they were quick to do what was necessary to have apples for themselves and their neighbors.  Heirloom apples were a result of their efforts.  Many kinds of heirloom apples, such as Golden Delicious, Red June, Yellow June, Stark, Early Harvest, Ben Davis, Pippin, Horse, Virginia Beauty, Crow Egg, and Taylor Sweet, have been grown in our area.

Small orchards were planted at the beginning, but later there was a large market that provided a major source of income.  Demand declined in the 1970’s and caused a great number of orchards in the three counties to close.  One county had thirty eight commercial orchards.  Now, there are only three in the Toe River Valley, two in Mitchell and one in Yancey.

There is hardly anything that compares to eating delicious apples.  They are always a treat to enjoy at any time, especially with a book before an open fire on a cold winter night.

In addition to being eaten raw and cooked, apples were used for making stack cakes, regular and fried pies, sauce, cider, apple butter, jelly, and other desserts.  They were also canned and dried for later eating.

Apples from our area won a coveted prize at an 1890’s World’s Fair in France.