From the Desk of Mr. James Byrd: Farewell to Singing on the Mountain 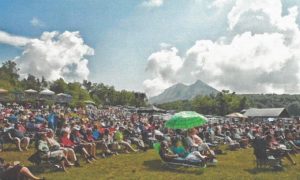 When Joe L. Hartley organized the first Singing on the Mountain in 1924, he had no idea that it would grow and grow and last almost a century until it ended this past weekend.

Much about the annual event caused it to become one of the largest and longest running gospel singings of its kind in the nation.  It has been presented in the midst of a region that highly values singing gospel songs and hearing preachers expound on the Bible.  People have come from close by and far away and found comfort in the cool mountain air at MacRae Meadows.  They have looked at the scenery on Grandfather Mountain as they experienced an outstanding occasion that kept them returning year after year.  Too, local and regional groups have been scheduled along with those who are widely known.  Another appeal has been that local singers and speakers and ones from distant places have been included.

Leaders of the event hoped and prayed for good weather, and with the exception of a few times it happened.  When Billy Graham was speaking, thunder rumbled in the distance, but it did not rain at MacRae Meadows.

The last song has been sung and the final talk given at the Singing on the Mountain this past June 26, and that brings an end to almost a century of a tradition that has warmed hearts of untold thousands and will be etched in memory.