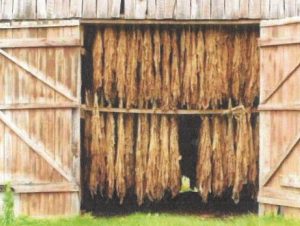 We look around and realize the landscape is quite different from what it was seventy-five years ago.  In driving from Burnsville to Asheville, one could see acres and acres of what was to be one of the big money crops each year: tobacco.  Fields soon to be harvested, hung in barns to dry, and be “worked off”, and loaded for market to be sold in time for Christmas money.

Growing the crop was quite risky.  A late freeze in Spring could damage the new plants in the tobacco beds.  Later, dry weather was harsh in trying to get the new plants to live in the fields.  Also, the thought that flooding could wash away the plants was always unsettling.

A big concern was an early frost or freeze.  By early October the green leaves of tobacco are turning different shades of yellow and brown.  The tobacco stalks are cut with approximately four tobacco stalks speared and placed on tobacco sticks in the field.  Farmers were eager to dry these stalks and get them hung in barns.

After curing out in the barns, the sticks of dry tobacco were passed down from the tiers or poles of the barn.  Then the process of grading and sorting the leaves was begun.  Older adults usually did the grading while younger help tied the bundles knowing they would receive some money when the crop was sold.  Efforts were made to have the tobacco look good to be on baskets to auction off at markets in Asheville, Boone, or Johnson City.

When the U.S. government gave up controls of tobacco, a huge change came to growers of tobacco in Western North Carolina.  Many local farmers gave up growing a tobacco crop.  Today, tobacco crops are not thought of by most individuals at Christmas time.