Special Delivery! From the Desk of Mr. James Byrd 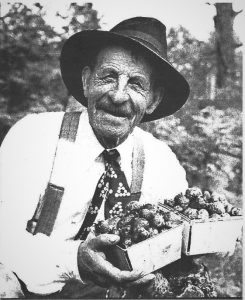 Joseph “Joe” Larkin Hartley, Founder of Singing on the Mountain

Joe Larkin Hartley (1870-1966), founder of Singing on the Mountain, was born in Watauga County, but spent much of his life in Avery.  As a child, he walked a long distance to school in a log building.  Not much is known about his early education, but he learned to read the Bible and Shakespeare, could quote them easily, and was considered an authority on both.  Reading the Bible and works of Shakespeare influenced him to write poetry.

His first marriage was to Cozie Fiola Shell, who died early.  Joe married again and was the father of a large number of children.

Joe’s work on and around Grandfather Mountain, along with countless miles of walking and boundless appreciation of nature, helped him to know the area as much as any other individual.  It was easy for him to think of Grandfather Mountain as one of the greatest wonders created for God’s glory and man’s use and enjoyment.

As with many other early settlers, Joe’s ancestors brought their music with them to the New World and then to the Southern Appalachians.  As a youth, he learned to appreciate the folk and gospel songs that were a remarkable part of his life.  Music provided entertainment at home and at church services.  Family members and friends often gathered to sing.  Before the Singing on the Mountain began, Joe, his family, and friends gathered each year to have a singing.  In 1924, others were invited to join them, and that was the beginning of an event that has continued almost a hundred years.

He was prominent in Avery County and the surrounding region, but being the founder and originator of Singing on the Mountain gave him recognition far beyond his familiar surroundings.

When Joe died at the age of ninety-five, he was buried in Tanglewood Cemetery near Linville.  The epitaph on his headstone reads: “His Life Exemplified Faith, Hope, and Charity.”  It was said of him that “He was tough as hickory and gentle as a saint.”

For more information on Singing On the Mountain, click here