A Crop Circle in Yancey County

More research in progress from Mr. James C. Byrd, local historian and beloved librarian here at the AMY Regional Library. Here’s a story you might not have heard:

A Crop Circle in Yancey County

Crop circles include circular patterns occurring in a field as the result of flattening stems of grains and other crops. They are attributed to natural forces, alien spacecraft, and hoaxes. They have been showing up for hundreds of years.

The first crop circle reported in the United States in 2005, measured 176 feet in diameter with a circumference of 553 feet. It was first seen on the morning of June 12th in the North Bee Branch/Horton Hill community at the Fairview Cemetery.

The day before, a farmer and his wife planted tobacco until almost dark below the steep hill of mature hay where the crop circle was seen the next day.

The annual decoration at the large community cemetery had also been scheduled for the next day, and a very large crowd of relatives and friends were there to see each other to decorate graves. Most of those in attendance had never seen a crop circle; therefore, there was much excitement, discussion, and speculation as word quickly spread from one end of the long cemetery to the other after people began moving and saw the perfect crop circle that did not have any sign of entrance or a trail leading to it.

The farmer mowed the hayfield shortly afterward and there was not any evidence that the crop circle had been there, but pictures had been taken and news had advanced to the national level before the mowing was done. 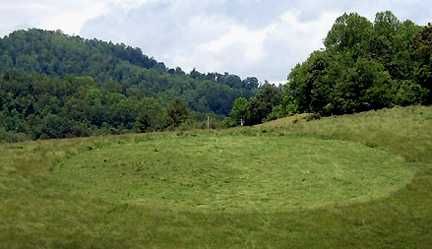