From the Desk of Mr. James Byrd: Judge Martin and His Outdoor Bathtub

Judge Martin and His Outdoor Bathtub

The first hand-hewn outdoor bathtub in the Toe River Valley was in the vicinity of Spruce Pine and was the idea of a judge.

Judge Spencer A. Martin, a North Carolina native, became a soldier and a federal prisoner during the Civil War.  When the war ended, he went to Arkansas, succeeded in business, served positions in county government, and was elected to the Arkansas House of Representatives for three terms.  The judge later relocated to Asheville.

After the railroad came through Spruce Pine, he moved there from Asheville and brought his library containing several thousand books.  He became prominent in town and was president of a local bank.

Judge Martin owned a sizable tract of land and thoroughly enjoyed his natural surroundings.  A stream with a bed of solid shale rock was on his property.  He used a large pick to dig an area big enough for his outdoor bathtub.  In providing privacy, the site was perfect because it was surrounded by large rhododendrons in a deep hollow behind his barn.

The bathtub was located close to present-day Hardee’s on Highway 19E near Spruce Pine.  Judge Martin’s grave is on a nearby ridge.  In keeping with his request, wildflowers for his funeral were picked by children in the neighborhood.

Image below of outdoor bathtub: 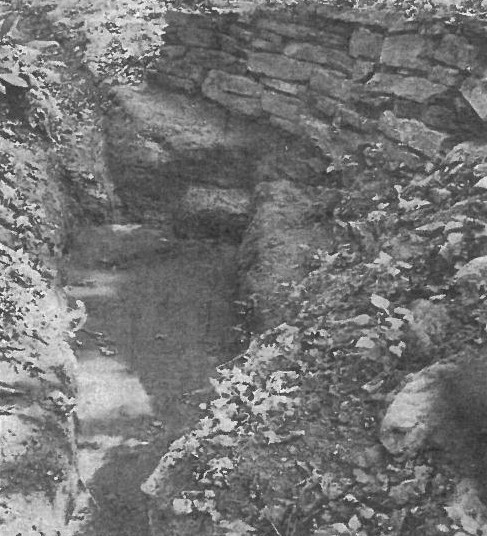