From the Desk of Mr. James Byrd: Let’s take a little visit to Ingalls 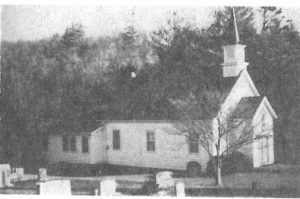 Much can be written about the churches and cemeteries in Avery County.  The Pine Grove Church and Cemetery in the community of Ingalls has historical significance along with interesting facts.

Like many other early churches, Pine Grove was first a log building that was used as a church and a school.  The present sanctuary was constructed with lumber from pine trees that grew on the property.  Some of the logs were large enough to provide boards more than a foot wide.  They were hand planed with skilled workmanship and were given an appealing stain.  There is evidence that a large stove, probably a pot belly, gave warmth for meetings on cold winter days and nights.

Later additions have been made to the church, but the small sanctuary has been kept as it was originally.

One of the special experiences in the church was when members of the National Reading Association came with author Gloria Houston and completely filled the sanctuary.  Someone eased over the piano and began playing “Amazing Grace.”  The music and moment left everyone spellbound.

William Wiseman, born in London around 1741, was an early settler who was buried nearby.  He had a large family who has carried the Wiseman name for many generations.  More than eighty Wisemans are buried in marked graves in the church cemetery and include Scotty and Lulu Belle Wiseman, nationally known stars of country music.