From the desk of Mr. James Byrd: Ramps Upfront and Personal

“There is nothing quite like it… Enjoying ramps in the springtime is what it is all about!”

Ramps, sometimes called the “King of stinks,” grow wild in wooded areas and in suitable soil at the right elevation in the eastern United States and Canada.

A delicacy that smells and tastes somewhat like onions, ramps can be eaten raw, fried, cooked, pickled, or frozen, and used for medicinal purposes.  A former resident of Yancey County likes them best in a sandwich made with mayonnaise and loaf bread.  Ramp lovers who have moved away look forward to returning for a springtime feast.  An indication of how well they are liked is that more than fifty ramp festivals with numerous recipes are scheduled in the eastern United States each spring.  Four of them are in the Tri-County area.

Ramps are big business and sold at roadside stands, grocery stores and are shipped in large amounts to distant markets.

My first encounter with ramps was at Clearmont School.  Boys, not ever girls, ate raw ramps and came to school the next day.  The strong odor was quite noticeable and fellow students began complaining.  The solution was to put an offending student in a far corner or out in the hall with a desk.

I was a teenager when I went with Dad, an uncle, and a friend to Yancey County’s Bald Mountain to gather ramps.  I enjoyed that experience on a sunny spring day and sampled a stalk to get a taste of what I had smelled at school.

Years passed before I was involved with ramps again.  A close friend asked me to go with him to a ramp fry that his preacher was having.  As we traveled down Cane River to a place where an old school bus had been converted to a camper, I decided that I would not eat a large amount.  The preacher had a fire going in an old cookstove.  When I looked on top, I saw what appeared to be the biggest cast iron skillet that had ever been made.  Ramps, potatoes, and eggs had been mixed in an oversize bowl and were put in the hot pan with butter and vegetable oil for frying.  The camper soon filled with strong ramp aroma.

As I watched the mixture frying, I thought that the three of us could not eat all of it, especially when I only planned to eat a small portion.  However, the preacher loaded our plates to the limit and served large pieces of cornbread with milk.  When I began eating, I realized what I had missed in earlier years and enjoyed a second helping along with the others. 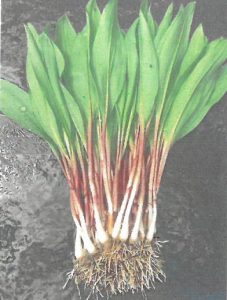 Image: Ramps in the Wild