From the Desk of Mr. James Byrd: The Temptations of Dried Apples, Apple Pies, and Just Plain Apples 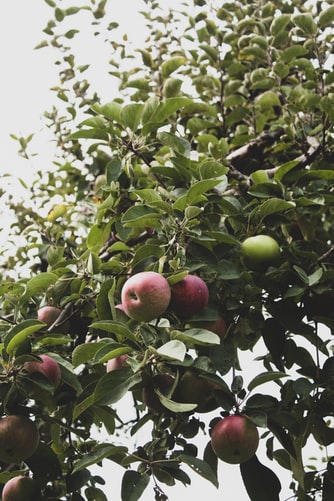 Grandmother Ann lived over the ridge from Rocky Hollow.  Like the other women in the neighborhood, she dried sweet sliced apples in summer.  She used white cloth sacks to hang them in an unfinished upstairs room to keep for winter.  By doing that, the dried apples would not gather moisture and were safe from the mice.  However, one sack became a victim of childhood wants and lost much of its contents.

Four of Grandmother Ann’s sons slept upstairs in the other bedroom.  One of them cut a hole in the backside of a sack to make it possible to have a tasty bedtime snack, thus that sack had far less dried apples when the loss was discovered.  The boys were questioned, but they never admitted their guilt.

Grandmother Ann was an expert in baking apple pies.  She baked several at one time and put them on the middle shelf in the corner cupboard.  That didn’t work because the boys would find an opportune time when she was not in the kitchen and ate all the pie that they wanted.  It was thought that the problem could be solved by placing the pies on the top shelf.  That did not work either because the boys climbed shelves and continued to eat the pies.

As with watermelons, apples have been stolen from trees and from where they were stored.  A story about that has to do with with Velmer Bailey and the neighborhood boys in Lost Cove.  He was a kind hearted person who owned a orchard.  He kept apples under hay in his barn during cold months.  The boys who lived close by slipped into the barn after dark and ate their fill.  When Velmer went to lock the barn for the night, he often heard them inside.  He left without saying anything to them.  He knew that he could return later and padlock the door.